In 2010, I followed my passion for pizza and opened my first pizzeria, Pizzeria Serio in Lakeview. I had been baking pizzas in my home oven for over five years prior to opening Serio in order to perfect my craft.

My partner and I had been looking for a location for a second pizzeria for more than a year.  When we found this cool little corner joint on Damen Ave in Wicker Park, we knew it was the perfect spot.  Wicker Park is a quintessential big city neighborhood that embraces a complete cross section of everything Chicago.  It’s home to some of the best music venues (rock, blues, soul),  art galleries, coffee shops, restaurants, as well as some great sports bars.  We didn’t want to pass up the opportunity to have this great little spot with outdoor seating so we jumped on it.

Regarding the pizza, Craft is similar in style to Serio;  Neapolitan American East Coast Style. With Craft, I wanted a little more crunch and chew in the crust which we get by using a slightly different flour, hydration/proof and even a different oven than Serio.  Our sauce, cheese, and toppings were chosen after countless taste testings and are of the highest quality. Craft Pizza was my chance to create the best pizza possible from what I’ve learned about making great pizza over the last decade.  I hope you enjoy the results. 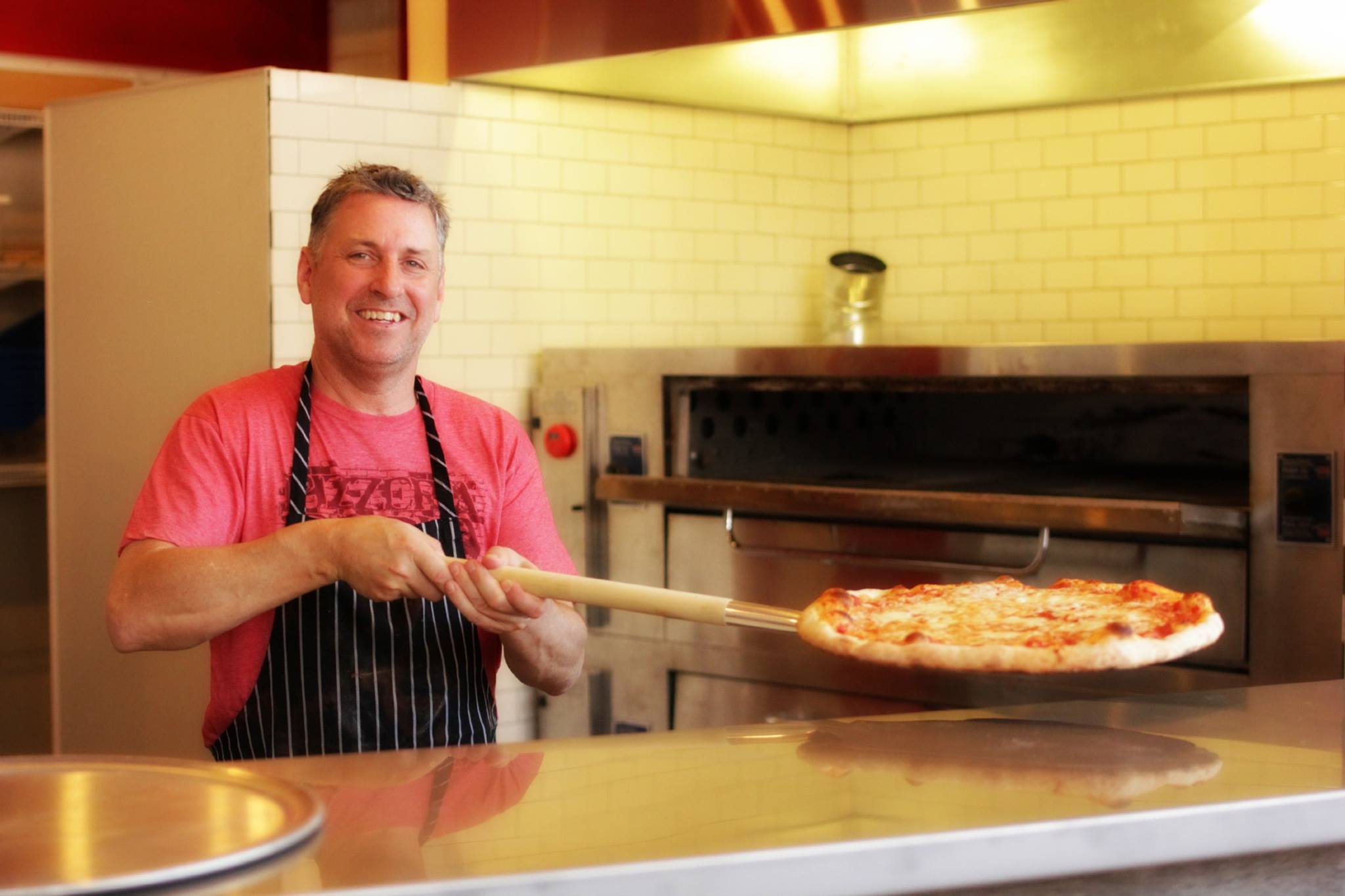 Pizza! Just the word gets us excited. We think it is the world’s best food! Everyone loves pizza right!? Pizza is without a doubt the most debated and controversial of all the food groups. Sorry BBQ! If you bring up pizza in a large group, everyone will have a differing opinion on what makes a pizza great. People argue about the superiority of regional styles, ingredients and techniques, kinds of ovens used, and even make claims about it being something in the water?? (A complete MYTH that we’ll talk about later). Strong opinions about pizza are firmly rooted in the passion of its devotees-and we wouldn’t have it any other way. Just think how bland and diluted a world this would be if everything was designed for mass appeal or to achieve consensus. We’re no different from our fellow Pizza fans. While we think that there is validity and merit to a lot of opinions, we have a pretty strong take on pizza ourselves, which we’re happy to share with you.

New York Style Pizza
NYC is ground zero for Pizza in America. It’s where the first Immigrants from Italy came and started making pizza how they made it in their homeland. Of course, over the years it evolved to meet American tastes. I like to call it NeapolAmerican Pizza. It’s a little heartier. It’s easier to eat as you walk down the street. Pizza was the original street food. A cheap, filling, tasty slice of pizza that was readily available when you needed a quick bite as you went about your day. You don’t sit down and eat a slice, who’s got time for that!? You walk with it, folded in half so it’s not so messy, and get to where you’re going. Pizza grew in popularity so much in NYC that there’s practically several “slice joints” on every block!

NYC is still the mecca for the greatest pizza in America. The techniques, equipment, recipes, skills, the CRAFT if you will, has been handed down from generation to generation. That’s why most of the best pizzerias in the country are in NY. For those that disagree, I’ll make this simple analogy: Italians make the best high performance exotic sports cars, India/Pakistan the best Rugs, Swiss the best watches, and on and on and on. It’s just what they do. They have done it longer and better than anyone else.

As pizza moved west, the CRAFT, if you will, started getting diluted or dumbed down so anyone could make pizza without learning the “proper” way to mix/proof dough, stretch dough, make sauce, etc. Dumbing down was also the result of mass producing it as demand grew.

As you move away from the East Coast, pizza starts getting…shall we say, ‘funky’. You’ll find thick crust pizza, deep dish pizza, cracker thin crust pizza, mac and cheese pizza, taco pizza, cheeseburger pizza, round pizza cut into squares, hippy pizza, California Pizza (ugh) and the list goes on and on. Being creative with pizza is great but at the same time it starts losing what it was meant to be. It starts NOT BEING PIZZA (That’s you Deep Dish), and all too often, the creativity is emphasized much to the expense of creating a great dough and sauce which is the foundation of a great pizza.

THE CRUST and CORNICIONE
Great pizza HAS to start with a great crust. We think of crust like one may think of a good steak. Most would agree the best steaks are cut thick which allows the meat to retain its juices when cooked which gives it flavor. A great steak house wouldn’t dare smash or pound their 2 inch thick steaks into a 1/8 inch flat disc. We don’t do that to our crust either. The whole process of proofing dough, or letting it rise, is to build all the air pockets that are created when the yeast is “breathing” in the dough. To sheet or compress it after this process is counter-productive of why you proofed it in the first place. You basically have pressed all the “flavor” out of the dough! Classic NY Style Pizza has a thin crust but the outer crust or Cornicione, if mixed/proofed/stretched/cooked correctly, has puffy edges that are crispy on the outside and a little chewy on the inside.

THE SAUCE
For anyone that’s researched and dabbled in making pizza at home, they have heard volumes about San Marzano tomatoes grown in the soil around Mt. Vesuvius near Naples, Italy. While there are a lot of great tomatoes from that Region, there are also great tomatoes grown right here in the USA. High quality tomatoes are easy to find. It’s how you prepare them into your ultimate pizza sauce that is key. How you crush them and what spices are added has EVERYTHING to do with the final product. Short of posting my “secret recipe” here, the best way to go is to lightly crush the tomatoes, add minimal seasoning, and never cook your sauce – it will cook on the pizza!

CHEESE
Very simple. High quality. Again, HIGH QUALITY! It’s really easy to spot a cheap, cost cutting cheese on a pizza. It will be rubbery, oily, burn easily and generally not have a lot of flavor.

BALANCE
We believe a great pizza should have great balance. That is the ratio of crust to sauce to cheese to toppings. We feel all too often pizza places just load up as much cheese and toppings on a cardboard (again, sheeted or compressed dough) crust. With this sort of pizza, all you really taste is the cheese, meat and veggies and not really the sauce and crust. Most of the time it is covering up for that fact that the crust and sauce HAVE no taste. It’s also fooling the customer into thinking it’s a great deal, because it’s cheap and filling. Sometimes less is more. We want you to taste all the elements of the pizza. We call it the goldilocks approach. Not too little, not too much, just right, when it comes to the crust, sauce, cheese, and toppings.

A FEW MORE THINGS
We don’t believe in reinventing pizza. Pizza was created in the mid 1800’s and was considered peasant food for the poorer people in Italy. It was a simple, delicious street food. Great bread, with a simple sauce made from sweet tomatoes and fresh creamy cheese. Yes, it’s evolved since then but the great pizzerias in the world today are still serving this classic pizza. You won’t find us serving hamburger & french fry pizza or turkey mash potatoes & gravy pizza, or pizza with pistachios and grape leaves. I’ll never forget when I opened my first pizzeria, a well know food blogger (Sky FULL OF BACON) wrote, “He says it’s Serious Brick Oven Pizza, but he’s serving the same toppings you’ll find at Fat Joe’s Pizzeria in Sioux Falls, South Dakota since 1982!!! Canadian bacon, Sausage, Pepperoni, etc, etc, etc. Doesn’t he understand that pizza has evolved and tastes buds have matured on and on and on?” All I can say to him is, yeah Mr. SFOB, I am, but I’m also serving the same pizza and toppings that are still being served at Lombardi’s, Grimaldi’s, Totonno’s, Patsys, John’s, Di Fara’s and a host of other Pizzerias in and around NY that are considered the gold standard for Neapolitan American Pizza and considered by most, if not all, pizza aficionados/writers/critics as the best pizzerias in America.

ONE FINAL THOUGHT
Pizza is a very personal thing. We hope we didn’t offend anyone and most of all we REALLY hope you like our pizza. We think it’s the way it should be done and we try to make a great pizza day in and day out at Craft. Let us know if you agree!